Professional fishermen are in hot water following accusations of cheating in a recent fishing tournament in Ohio.

Competitors at the Lake Erie Walleye Trail Tournament Series (LEWT) believed something was fishy when the catch of two anglers' was suspiciously heavy. Competitors claimed that fellow fishermen were guilty of stuffing the freshwater fish with weights.

It appeared that Chase Cominsky and Jake Runyon had reeled in a victory in the 2022 Lake Erie Walleye Trail Championship event on Friday. However, a cheating accusation sank the high-stakes professional fishing event.

A viral video allegedly shows Lake Erie Walleye Trail director Jason Fischer cutting open the fish caught during the tourney by Cominsky and Runyon, according to The Herald. Inside the body of the walleye fish were several lead weights and filets from other fish. The artificially enhanced fish netted the alleged cheating duo a tournament win.

Competitors at the Lake Erie Walleye Trail Championship wanted to tear the purported cheaters to pieces, but police officers were nearby.

The red-handed Runyon appears to play coy as the mob shouts at him, "You should be in jail!" 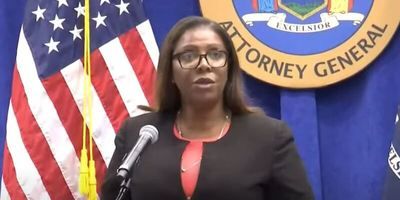